I've blogged before about the excellent Torchlight game by Runic Games which has been set up by the ex-Diablo creators and closely resembles in feel the Blizzard game. There are now plans to turn this single-player game to a grander-scale MMO. Runic boss Travis Baldree confirmed that the game's creators are out to make "an MMO that plays as close to single player as we can get it". 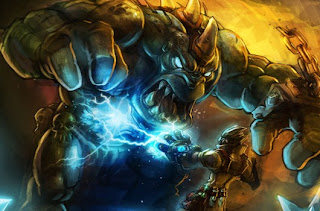 "It will have the same focus on relatively fast action: carving your way through hordes of monsters with a large number of hugely devastating skills." Baldree also stated that"We don't want our monetisation stuff to offer ways to skip the game because the game is boring", an interesting point inferring to not being able to unlock the game by paying. Lookign forward to this as Diablo is much missed (with the third installment of the game still far away in the horizon) and an MMO version of Torchlight could indeed fill this position very nicely.
Posted by Christos Gatzidis at 7/01/2010 10:53:00 am