Monkey Island 2 on the CryEngine?

I remember reading years ago that first-person shooters and 3D killed off the traditional point-and-click adventure games. That may well be true but I've just come across an amazing effort of recreating a number of well-remembered environments from LucasArts' 1991 iconic Monkey Island 2 title (one of the best adventure games ever IMO) using the CryTek's CryEngine in 3D.

While I usually (and I suspect most people too) find efforts of turning classic 2D game environments in 3D incredibly twee, this one is surprisingly good, to the extent of utilizing the artistic strengths of the original environments but in a modern, state-of-the-art real-time graphics setting. Check it out in the video above. Before you get too excited however this is not the beginning of a remake of MI2 with the CryEngine, just a showcase of the latter's potential combined with the great art ideas of the LucasArts game...
Posted by Christos Gatzidis at 9/23/2009 10:43:00 am No comments:

Something I've just come across on the Digital Urban blog, for anybody into urban modelling using 3D Studio Max (and unable to afford the admittedly large licence for a dedicated application like CityEngine), Tyson Ibele has made available (for free!) on his website a procedural script for the creation of 3D virtual cities.

I've tried it and it works a treat, you can control a great number of parameters on the buildings themselves (amongst other things, windows, ledged, floors, railings, pillars, roof objects etc.) and also create paths for building positioning. The video above demonstrates a 3D city created by the script, which is well worth downloading (for using it you will need a version of 3D Studio Max 9 or newer).
http://tysonibele.com/
Posted by Christos Gatzidis at 9/23/2009 10:29:00 am No comments:

Could we ever get something like Crysis, one of the most resource-hogging games ever to run on the diminutive iPhone? Well, sort of... Companies such as OnLive have already woken up interest in cloud-gaming (covered in a previous post), using a system of remote server processing and rendering that means local computers can be little more than viewing devices, but now that system has been shrunk down to cellphone size.

A new company called OTOY uses the same sort of server-side rendering system as OnLive, but through a web browser on a cellphone. To demonstrate this, they’ve released a video showing an Xbox 360 controller being used to control a first person shooter game on a Samsung Omnia. It certainly looks impressive on the vid above although I'd like to see it first hand too in order to establish how good the quality is. Still, the idea is certainly sound (remote rendering can be the only way to get quality graphics on a mobile device with modern technology) and very innovative.

I recently visited, along with some Bournemouth University colleagues, IBM Hursley. Amongst other work that was presented to us there was also some excursion into the world of the educational/serious games. This comes in the form of the Academic Edition of INNOV8 2.0, the IBM Business Process Management (BPM) simulation game, giving both IT and business players an excellent introduction to BPM, from learning the anatomy of a model, to how one might optimize the model and make a company more profitable.

The game features a fictional call center agency, After Inc, who has a process model that is functioning sub-optimally. As the protagonist Logan, you must discover the current model, find out why it is under-performing and then optimize it to meet the demands of the market.

The game is available for free to all academics as part of the IBM Academic Initiative and can be downloaded from http://www-01.ibm.com/software/solutions/soa/innov8/full.html.

Zune HD, a rival game console to the iPhone? 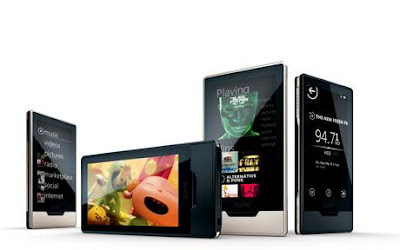 Games can be added to Zune HD via Zune Marketplace over the Wi-Fi connection or when connected to Zune PC software. At the moment available in the US only, the 16GB Zune HD retails for $219.99 and the 32GB version for $289.99. The device features a built-in HD radio receiver, HD video output capabilities, an OLED touch screen and an internet browser. Microsoft also said that it will support applications like a calculator, an MSN Weather app, Twitter and Facebook.

It was only matter of time till Microsoft wanted a bite at the cherry in the mobile market but also in the mobile game market where they could potentially have a considerable advantage over even Apple. It remains to be seen how the Zune will fare as both a mobile device but also a portable games console.

The Google Earth blog reported last week that more UK 3D cities had been added such as Cardiff and Dublin. It seems now Birmingham also joins them, seen on the movie below.
The results are very impressive with some very good texturing work and it is fascinating to see more and more 3D urban models of major UK cities added to the list. It of course remains to be seen exactly how these models will be used and whether any additional functionality can/will be added to them in order to make them more interactive and not just a navigational fly-through environment.
Posted by Christos Gatzidis at 9/16/2009 10:24:00 am No comments:

The Old Town Square is one of the most picturesque places of Prague, its historical centre, the very heart of the Old Town. Historic records indicate it served as a big marketplace since the XII century (medieval Prague used to be in the path of a major trade route).
The grand Gothic cathedral - the Church of Our Lady in front of Tyn – dominates the square ensemble. Construction of the cathedral began in the XIV century, and was completed as late as the XVI century. A monument to Jan Hus, who was the leader of Czech Reformation, also stands on the square.
Another sight of the Old Town Square is the complex Prague Astronomic Clock located on the wall of the City Hall. It shows not only hours and minutes but also the times of Sun and Moon’s appearances, star sign positions, months and years. The bells chime every hour and those walking on the square can watch a colorful parade of moving figurines.
By downloading the Vizerra application at the link below it is possible to explore a very good 3D model of Old Town Square in Prague.
http://vizerra.com/en/download
Posted by Christos Gatzidis at 9/11/2009 03:52:00 pm No comments:

The Kentucky Community & Technical College System (KCTCS) presents a way of fusing interactive 3-D models with hands-on simulations to provide multiple opportunities to experiment without risk and enhance learning for the future workforce.

Traditionally, academic institutions have relied on tools such as blackboard outlines, physical demonstrations and videos to facilitate learning. However, through computers and projectors, 3-D technology allows users to see a person, place or thing as it would appear in real life. This opens the door to a virtual world of possibilities in the classroom, where students can learn about science anatomy, geography, architecture and astronomy by interacting with the content rather than reading about it in a textbook. 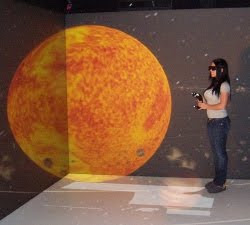 KCTCS, which includes 16 colleges across 65 campuses, created the KCTCS Interactive Digital Center which currently has completed the creation of five interactive digital learning modules in the areas of energy, health care and manufacturing. The IDC has also delivered training across the country to other colleges and businesses on how to use the 3-D software in addition to creating customized solutions for industry clients.

Although KCTCS leadership had been looking to integrate the 3-D technologies into the classroom for the past seven years, the push really came in the wake of the coal mining tragedies in 2006. That's when KCTCS launched its first virtual project for the Kentucky Coal Academy to show advantages of simulation-based training.

Such innovative units of instruction can be viewed on a laptop, while others use 3-D stereographic projection technology, which allows learning objects to pop out in the middle of the room. For some projects, students enter a space called a "CAVE," which has screens on the walls that project a real environment of the respective field such as a hospital room, for instance.
Posted by Christos Gatzidis at 9/05/2009 01:08:00 pm No comments: