Member of Program Committe for VS Games 2011

I have been invited to be a member of the International Program Committee for VS Games 2011, the third international conference in Games and Virtual Worlds for serious applications.

VS-Games'11 will be organized with full support of the host institution for the 2011 outing of the conference, National Technical University of Athens (NTUA) Athens, Greece. This will be in May 4-6 2011. The conference will take place on the NTUA campus. The third International Conference in Games and Virtual Worlds for Serious Applications (2011) aims to meet the significant challenges of the cross-disciplinary community that work around these serious application areas by bringing the community together to share case studies of practice, to present virtual world infrastructure developments, as well as new frameworks, methodologies and theories, and to begin the process of developing shared cross-disciplinary outputs.
http://www.coventry.ac.uk/ec/~fotisl/VSGames2011/index.html
Posted by Christos Gatzidis at 5/27/2010 02:16:00 pm No comments:

If you want to explore the capabilities of 3D models in Google Earth then a fantastic little game, based on the upcoming A-Team remake movie has just been released. The game is called Drive The A-Team Van with the title being fairly self-explanatory. The video below illustrates the game although I would wholeheartedly recommend checking it out by having a go at playing it.
The game allows you to drive around several capitals and large key cities and showcases how far Google Earth has come in terms of its 3D modelling content (and also the potential it has for the future).
You can find it here.
Posted by Christos Gatzidis at 5/18/2010 11:48:00 am No comments:

I recently submitted my PhD at City University London, which will now be assessed and defended via an oral viva over the next few months. The PhD is titled "Evaluating Non-Photorealistic Rendering for 3D Urban Models in the Context of Mobile Navigation". I begun reading towards this degree in Oct 2005 so it has been quite a journey. 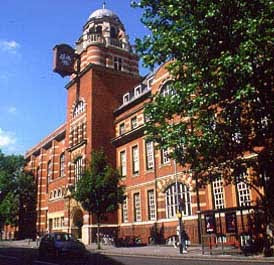 The research presented in this thesis examines the legibility of using different rendering styles in the context of 3D navigation on contemporary mobile devices. The styles examined deviate from the usual representation of 3D urban models on current applications, which at the moment strive for an approximation of realism. Other than the technical resource limitations posed by this, the use of this photorealistic approach, in the context area given, eliminates the possibilities of abstraction plus thematic highlighting and connectivity, obstructs inference to traditional cartography and flexibility in visualization. Finally, visual attention overload can be observed, which can be very detrimental to navigational decision-making. The alternative approach explored is the use of non-photorealistically rendered stylizations, of differing styles, suggested to possess benefits such as communicative aspects, which can influence low-level perceptual processes and emotional responses to cognitive workloads, interactivity motivation, the succinct presentation of context-assistive information and decreasing user effort. These styles are influenced by 2D human artwork, as simulated by computer algorithms.

The investigation consists of four empirical studies, conducted in a range of conditions, across a combined total of 211 participants. The first and second studies are based on the use of self-reported rankings for crucial spatial attributes of the, respectively, 2D and 3D scene stimuli. For the third experiment, following the Nielsen usability taxonomy and based on a route retracing task, objective measures are collected. Similarly, for the final experiment a route retracing task is repeated, which on this occasion contrasts the learning the rendering styles provide for a realworld urban location, rather than a virtual one. Across all experiments standardized additional tests such as the Santa Barbara Sense of Direction scale, the NASA TLX workload assessment tool and the IBM Computer Usability questionnaire provide additional information on both the user experience and the population sample itself. A three-tier architecture-based prototype pedestrian navigation application with GPS and digital compass sensor integration has been used in the studies, capable of the display and interaction of egocentric, real-time, georeferenced 3D urban location models.

Findings suggest a consistent common thread across all four experiments of strong support, based on extensive statistical analysis, in both user preference and user performance to non-photorealism over the verisimilar representation. This elicits the emergence of certain non-photorealistic styles, such as cel-shading and sketched shading, as effective new user interface paradigms for mobile navigation. Key outcomes from the experiments include, amongst others, the ranking of the sketched style ahead of photorealism in finer detail distinction and interaction engagement (first and second studies respectively). Additionally, another important observation is the superior performance of cel-shading in task time completion, error rate, disorientation and context-switching in the final experiment, signifying how easier it is for users to learn and remember a mobile virtual route rendered in this manner. All results are discussed and explained in terms of applicable existing perception work. The research concludes with a discussion on the suggested technical benefits of the non-photorealistic approaches, such as level-of-detailing and mip-mapping, progressive network transmission and generalisation as well as the potential use of biometrics-related modalities to collect additional information in future experiments.

A publication I have co-authored with researchers here at Bournemouth University has been accepted for publication at July's 14th International Conference in Information Visualisation (IV 2010), to take place in London, UK. This will be between the 26th and the 29th of July at the London South Bank University. 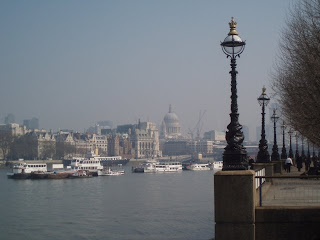 The publication is under the full-paper track of the Biomedical Visualization symposium (MediVis) and is titled "Investigating the Trend of Virtual Reality-based Stroke Rehabilitation Systems".
http://www.graphicslink.co.uk/IV10/
Posted by Christos Gatzidis at 5/09/2010 10:33:00 am No comments:

IBM recently announced the development of CityOne, a new serious game that can assist urban planning. CityOne is a free, Sims-style game where the player is tasked with guiding the city through a series of missions. These include industries such as energy, water, banking and retail.
For example, according to the IBM press release, one mission involves a city where water usage has increased at twice the rate of population growth with supplies becoming strained and polluted, the municipality losing as much as 40 percent of its water supply through leaky infrastructure and energy costs steadily increasing. For this mission to be completed, the player would have to institute a Water Management System that would include accurate real time data in order to make decisions on delivering the highest water quality in the most economical way.

I've blogged before about IBM's serious games foray (the INNOV8 project, check the post out here), for more information on their current effort visit http://www.ibm.com/cityone.
Posted by Christos Gatzidis at 5/09/2010 10:16:00 am No comments:

While I was disappointed to hear that Ubisoft moved away from their adopted cel-shaded approach in the new installment of the Prince Of Persia games saga, the new cinematic intro/demo released for the game (called The Forgotten Sands) illustrates in a great way just how far photorealism in gaming has progressed.

Check out the video above, while I have a very strong interest in non-photorealism and its inherent abilities, the technical achievements of approximating reality in games should not be understated. Eagerly awaiting for the release of the game itself.
Posted by Christos Gatzidis at 5/07/2010 02:44:00 pm No comments:

An interesting new publication for anyone connected to the games industry is Interactive Age. Interactive Age is a peer-journal printed twice-yearly for an audience of executives, creatives, and decision-makers in the video game industry.
The magazine features essays, research, roundtables, case studies and regular columns from the presidents of both the Entertainment Software Association and the Academy of Interactive Arts and Sciences. 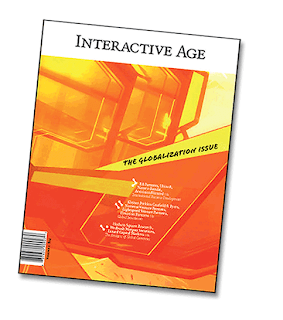 Mixing substance with style, Intreractive Age offers a platform to elevate game industry discourse and promises to provide deep insights to anyone who wants to know how to succeed in interactive entertainment. The first issue is already out.
http://www.interactive-age.com/
Posted by Christos Gatzidis at 5/05/2010 05:08:00 pm No comments:

The excellent Digital Urban blog features an attempt at extracting 3D geometry from a painting So using a section of Visscher's panoramic view of London circa 1616. In this, lines of perspective were put in and the main features were traced around. The results, found in the YouTube clip below, are very impressive.
Creating a 3D flythough or indeed a full 3D model from a traditional painting definitely showcases a lot of potential in exploration. This was created using the photomodelling Canoma package.
http://digitalurban.blogspot.com/2010/04/3d-art-extracting-geometry-from.html
Posted by Christos Gatzidis at 5/05/2010 04:56:00 pm No comments: