An interesting conference taking place in my home country is ACE (Advances In Computer Entertainment Technology) 2009. ACE has become the leading academic forum for dissemination of novel research results in the area of entertainment computing. This year for the first time it incorporates DIMEA which has established itself over the last three years as a strong conference on interactive entertainment arts and is organized by the ACM SIGCHI, the Foundation of the Hellenic World (FHW) and ACM SIGCHI Singapore. Together the conference forms an exciting new step blending deeply the latest research in art and technology.

The focus of ACE 2009 is to gather researchers from academia and industry-researchers who are working in multi-disciplinary areas within the arts, psychology, computer science, and design- to discuss, present, and demonstrate their new contributions. The goal of ACE is to stimulate discussion in the development and advancement of interactive art and entertainment applications.
The conference takes place between the 29th and 31st of October 2009 at Athens, Greece, check http://www.ace2009.org/.
Posted by Christos Gatzidis at 5/26/2009 03:50:00 pm No comments:

From the Digital Urban blog, on an application that I've blogged about very often, Procedural have released a new version of their CityEngine, appropriately titled CityEngine 2009. The updated version provides new innovative tools for urban design and modeling on a citywide scale. 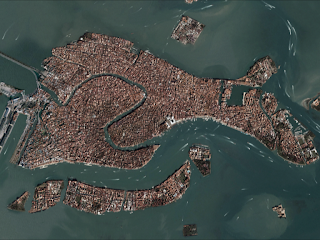 Key highlights of the CityEngine 2009 include:
1: Interactive Editing (immediate mode, undo/redo, etc.)
2: Improved 3D Export (Collada with instancing, 3ds Max, etc.)
3: Support for Geospatial Data (import/export of GIS data)
4: Improved Street Geometries (with round curbs, junction handling, etc.)
5: Occlusion in CGA Shape Grammar (to query the spatial context)
6: Reporting Functionality (Excel tables for master plans)
7: Python Interface (to speed up and streamline repetitive tasks)
8: Floating License (enables flexible network licensing installations)
All those updates aside, the most important feature of the application is the ability to import .shp files opening up the possibility to import elaborate GIS data into the application. This addresses one of the most important criticisms that was levelled towards the app, that of not tackling the modelling of real-world cities with real-world data.
http://www.procedural.com/
Posted by Christos Gatzidis at 5/26/2009 03:37:00 pm No comments:

An interesting project I've just come across, created by a company called Designhive and Arkins Public Realm Limited. The aim of this project is to create a powerful and technically accurate public consultation video that would bring to life the proposed regeneration scheme of Oxford Circus. For those purposes, real simulated data was used to visualise the impact on future pedestrian and traffic movement, to make it a believable vision of a future reality. 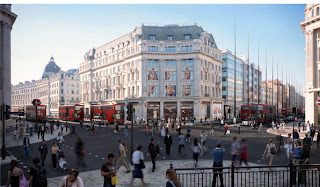 The animation showcased the current Oxford Circus situation and then the improvements the removal of street clutter would give. This was replaced by the proposed street scheme using comparative before and after footage. Designhive devised a method of reflecting Atkins' two-dimensional traffic and pedestrian models in a 3D Studio Max model of the proposals. 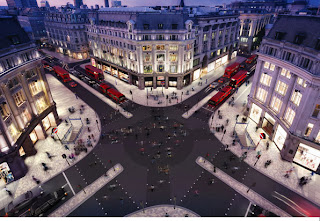 For pedestrians, a particle-based system was used, running seven different layered simulations controlling 5000 virtual people to match up the data produced by Atkins Intelligent Space. When the final simulation was rendered, the 'particles' were replaced with animated people. The end result is a simulation that is difficult to distinguish from a real piece of video footage and seemingly very useful for public consultation and proposals to a lay audience in way that is accessible, engaging and believable.
http://www.designhive.co.uk/Press_and_PR/News_London_Oxford_Circus
Posted by Christos Gatzidis at 5/22/2009 03:59:00 pm No comments:

Navigation devices are everywhere and just keep getting better and better thanks to the 3D maps provided by the likes of Tele Atlas (owned by TomTom) and NAVTEQ (owned by Nokia). 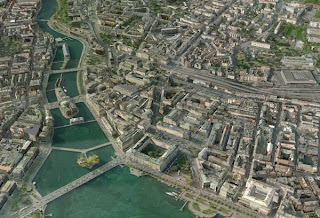 It now transpires that Tele Atlas is announcing its photorealistic (i.e. textured) "Advanced City Models" destined for in-car and portable navigation systems and mobile devices. In June, Tele Atlas will release 40 maps based on BLOM arial imagery for cities across Europe. Hundreds more cities, including those in North America and Asia, will be available in 2010.

It is important to note Google already has laid ink to paper to give it rights to Tele Atlas maps for use in Google's mobile, desktop, and on-line offerings, and with Tele Atlas maps loaded on PSPs and navigators from Pioneer, Mio (and of course TomTom) just think of this as a hint of what's to come.

Personally this is a very exciting piece of news as GPS navigation, despite small steps here and there, never really embraced 3D urban modelling, especially one where the models come in a textured capacity. More news on this one when the textured 3D maps become readily available.

The idea to use Google map data for a game came to the people at Dinther Product Design almost 2 years ago. Since the release of the Google Earth plugin and it's versatile programmers interface it became feasible to write a comprehensive application using Google Map data. 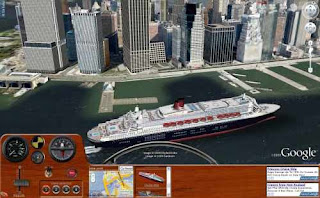 "Ships" is a case study / technology showpiece that demonstrates what can be achieved with Google Earth. While map data has a tremendous value for practical purposes, it can also be used as a backdrop for a range of games. In this ship simulation game you get to be the helmsman of your own fleet of ships. Although it is a case study, you will find "Ships" entertaining as it will take you past the worlds incredible scenery at a leisurely pace. All you need to play ships is a small Google Earth plugin.
Check the game out at http://www.planetinaction.com/ships.php
Posted by Christos Gatzidis at 5/21/2009 11:25:00 am No comments:

According to recent rumours Microsoft is developing a new videocamera for its Xbox 360 videogame console that will allow players to control games with the movement of their bodies. This new device is rumoured to be a novel twist on Nintendo's Wii videogame console, which allows users to swing a tennis racket and other objects in games by holding a plastic wand in their hands.

Unlike the Wii however, the Microsoft camera won't require users to hold any hardware in their hands to control in-game action, people familiar with the matter say. The camera uses 3D technology to give players more accurate control over games than earlier game cameras did. 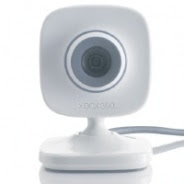 This all sounds a lot like a Microsoft version of the 3DV Systems camera which the company was reportedly set to buy earlier this year. Reportedly, Microsoft was planning to pay $35m for the firm, whose ZCams tech is likened to Sony's EyeToy, but with more precise imaging and motion sensing due to its 3D camera system.

Microsoft is no stranger to mimicking the EyeToy - it previously released the Vision Cam for the 360, which used player movements at input for XBLA titles and recorded player video in You're In The Movies.

Reports state the controller, tentatively called 'Xbox Fluid' will be unveiled at this year's E3 event. Microsoft's press conference at the event takes place on Monday, June 1st. An interesting development, I'll post on this again if it takes place as the rumours suggest at the E3 event.
Posted by Christos Gatzidis at 5/14/2009 08:39:00 pm No comments:

An interesting story I read today in BBC News, Rome's underground Christian, Jewish and pagan burial sites, the Catacombs, which date back to the 2nd Century AD are for the first time virtually reconstructed in 3D.
There are more than 40 of them stretching over 170km (105 miles). But, until now, they have never been fully documented, their vast scale only recorded with handmade maps. That is now changing, following a three-year project to create the first fully comprehensive three-dimensional image using laser scanners.

A team of 10 Austrian and Italian archaeologists, architects and computer scientists have started with the largest catacomb, Saint Domitilla, just outside the Italian capital. The tunnels, caves, galleries and burial chambers of Saint Domitilla stretch for about 15km (9 miles) over a number of levels. At a time when Christians, in particular, were persecuted, the Catacombs became a relatively safe place to bury the dead. The soft, volcanic tufa rock was an especially workable, yet durable, material that was burrowed out over the course of nearly three centuries. Yet, because of concerns about safety, only about 500m (1,640ft) are accessible to the public today. 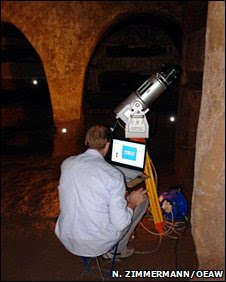 The leader of the project, Dr Norbert Zimmerman of the Vienna Academy of Sciences, was behind the idea to use laser scanners to record every part of the Catacombs. His scanner, which looks like a cylinder on a tripod, stands a metre or so high and is a piece of kit you usually find in the construction industry.
"It is not a virtual image, it is not animation - what you are seeing is real data," says Dr Zimmerman."You could have filmed each room. But that would not have given you the ability to 'travel' through the catacomb in a way that the scanned images allow", he says. "It's moving, 3D flexibility, gives you the chance to compare areas, to assess the ways the Catacombs were developed over time, to analyse how and why those who built them did what they did", he adds. "That's never been possible before."
Posted by Christos Gatzidis at 5/03/2009 02:02:00 pm No comments:

I've just picked up the June copy of Edge magazine and, during the coverage of the recent X48 GameCamp competition (I've blogged about this before), there's a team of four Bournemouth University Computing students featured prominently along with their game Instinct.

I've taught all four students throughout this year for their Games unit and it is refreshing to see them doing well and excelling on a national level during high-profile competitions. Well done guys, keep up the good work (and see you in the final year for some more game development lectures and labs!). Meanwhile, the game from the Bournemouth team can be seen on the vid above but also downloaded from http://www.x48gamecamp.com/instinct/ (and it's very good fun too!).

I am now part of the Program Committee for the IASTED HCI 2009 conference, a major forum for international researchers and professionals to present their latest research, results, and ideas in all areas of human-computer interaction. Its aim is to strengthen relations between industry, research laboratories, and universities. 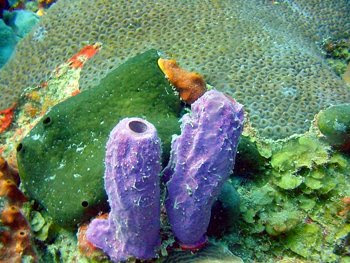 IASTED-HCI 2009 is being held on the island of St. Thomas in the US Virgin Islands between the 22nd and 24th of November 2009, for more information check the website of the conference at http://www.iasted.org/CONFERENCES/home-673.html
Posted by Christos Gatzidis at 5/01/2009 07:44:00 pm No comments: