Mobile devices used as a barcode to replace paper tickets?

An interesting piece of news I spotted this week is that the UK Chiltern Railways line has set-up a system where you can prebook tickets and have the barcode stored on your mobile device (and by that I mean PDA and not cellphone) removing the need for paper tickets. To my knowledge this is the first time I see this in the UK. However another company in the travelling sector, Continental Airlines in the US, is also trialing this. Could this be the latest trend in mobile device usage? 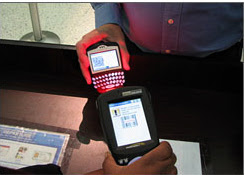 It's certainly an exciting concept and I will be curious to see what the outcomes are and indeed whether anybody else will be keen to adopt this... According to many, a number of organisations have in the past tried to use mobile devices as barcode scanners with not a lot of success, usually because of the challenges of lighting conditions.
This reversal however seems very useful as long as the passengers are using mobile devices capable of displaying a barcode. Also this could well be extended to commercial applications beyond travelling such as event tickets etc.
Posted by Christos Gatzidis at 12/18/2007 09:23:00 pm No comments:

Virtual worlds and the US elections

One of the best indications of the importance of virtual worlds in everyday life is their recent, albeit tentative, involvement in US politics. As part of a much broader online poll, Senator Hillary Clinton is asking participants about their gaming and virtual worlds habits. The campaign asks "which of the following have you visited or played online? Sim City, Second Life, Sims, None of the above, Other, Don't know." 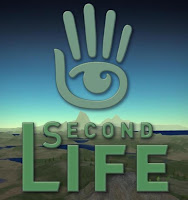 It should be noted that while some other Democratic presidential candidates, like Kucinich, have made entrances into campaigning in Second Life, more frequently strategists seem to be recommending against that. Clinton's strategist didn't participate however so it may well be that she's also gearing up for a virtual campaign. Another possibility is that with virtual worlds taking on more of a role in government and government taking a role on in virtual worlds, that this could be associated more with questions about policy. Finally, it could simply be taste polling to determine what's hip nowadays with the Web kids.
In any case it is fascinating to see virtual landscapes taken so seriously these days as to actually be a part of the US election process, it certainly makes a huge difference from them being regarded as outlet for computer geeks, which was certainly the case a few years ago.
Posted by Christos Gatzidis at 12/17/2007 08:07:00 pm No comments:

Recently I was made aware of a new, and seemingly incredibly effective, automatic rapid 3D virtual city modelling approach called Earthmine. In short, the system adopts use of stereo panoramas to extract 3D information thus presenting a rapid way to both create and populate a 3D model in a way that is easily understandable. The video below can take you through the process in a more detailed manner.
Earthmine has just put out a release that states: "earthmineinc., 3D street side mapping company today announced it has finalized an exclusive agreement with the California Institute of Technology (Caltech) to license 3D data generation software and algorithms created by NASA's Jet Propulsion Laboratory (JPL) and utilized on the Mars Exploration Rover Missions. earthmine recently unveiled its ground-breaking technology for collecting and delivering street-level three dimensional geospatial information for cities. The agreement with JPL and Caltech includes an exclusive and perpetual license for photogrammetric technology that allows for the creation of very dense and accurate 3D data from stereo panoramic imagery."
I am eagerly awaiting a more developed proposition from Earthmine as this piece of news, plus of course the method demonstrated in their vid, definitely looks like the way forward for rapid urban modelling, till then keep checking their site at http://earthmine.com/.
Posted by Christos Gatzidis at 12/17/2007 12:32:00 pm No comments:

The Redmond-based company VirtuSphere has developed a unique virtual reality sphere which allows a person to walk, jump and even run while wearing a special wireless VR glasses. This device which can only be described as ultra-immersive VR has already been tested by the U.S. Office of Naval Research and is currently on the market for whoever can afford the $50-100k price tag.
So, how does it work? The VirtuSphere consists of a large hollow sphere that sits on top of a base allowing the sphere to rotate 360 degrees. Wearing a wireless, head-mounted display, users can step inside the sphere to fully interact in immersive virtual environments. The VirtuSphere enables 6 degrees of freedom so one can move in any direction, walk, jump, roll, crawl, run over virtually unlimited distances without encountering any real-world physical obstacles. 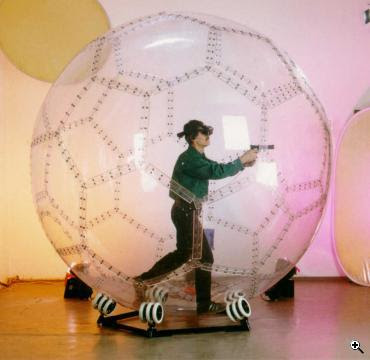 The VirtuSphere was designed for multiple applications and possible consumers including a military simulator for training exercises, VR technology for the electronic gaming industry and also an advanced tool for professionals such as architects, real estate agents and all others who can use virtual walkthroughs in a 3D environment.
A great selling point of the device and also something I see as hugely revolutionary is that unlike other events taking place in the virtual world (such as say shooting enemies in Half-Life) here one will actually feel the pain of the fall! VirtuSphere claims that in 99% of the cases you should be able to get up by yourself and that falling in the VirtuSphere may be less traumatic, as by design the sphere rotates on the supporting platform and a lot of the fall impact is absorbed. Still not so sure I want to try that (isn't the sphere made of steel!?!) but the concept of this does nonetheless sound amazing!
Obviously, the main issue holding up mass adoption of this immersive VR technology is the price but as with all new technologies as time goes by prices will drop and the technology will become more wide spread. I for one am looking very forward to see this sphere involved in research projects as it looks like it could assist in exploring avenues that were virtually impossible to access before...
Posted by Christos Gatzidis at 12/16/2007 09:54:00 pm No comments:

GPS for the iPhone?

With the exciting rumour of a TomTom GPS for the iPhone doing the rounds recently now sadly shot down in flames, it is exciting to see someone else rising up to the challenge. After all as a navigation aid, the iPhone offers way too much potential, not to mention market place, not to be developed in a commercial proposition. Engineering firm partfoundry is taking a confirmed stab at developing a custom, purpose-built GPS module that slots into the iPhone's port, delivering 16 channels of satellite reception to the software of the user's choice. 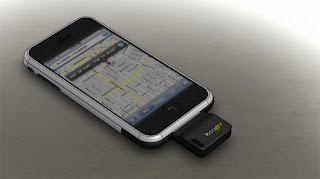 The last part does sound a bit like partfoundry will be requiring jailbreaked phones and also a large reliance on the developer community to serve up applications capable of processing the module's output and making decent use of it. At the moment the current plan is to get these GPS modules out in February, priced at a modest $89. Finally, plans are already underway for a stylish plastic enclosure as well. Check the following link for more details http://partfoundry.com/iphonegps.html
Posted by Christos Gatzidis at 12/16/2007 09:38:00 pm No comments:

While I have featured posts on GPS navigation before, here is something different albeit in the very same field. While radar-based cruise control systems are quickly becoming par for the (luxury!) course, Nissan is upping the ante with a new setup that integrates the on-board navigation system to adjust vehicle speed. The system works by capturing route information from the Sat Nav, anticipating curves and then adjusting speed for the corner plus also resuming acceleration once the turn is complete. 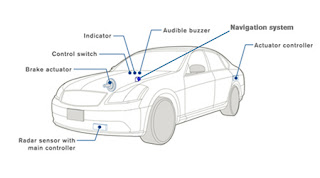 A highlight of the system is the Distance Control Assist feature. This essentially ensures that drivers are aware of an impending disaster, even with their foot on the accelerator, by pushing the gas pedal against the driver's foot. When and if the system detects things are going to go sour, it will play audio warning and also display a message telling the driver to hit the brakes pronto!
While the automation the GPS cruise control system Nissan seems to be inclined to introduce does take a lot of fun out of driving it has to be said that it does use the technology in an ideal way while pushing forward GPS car applications to their very limits. Also, let's face it, when cruise control was introduced it was greeted with a lot of sceptisism too and that didn't seem to deter a number of car manufacturers using it on their higher-priced vehicles to this day...
Posted by Christos Gatzidis at 12/16/2007 09:25:00 pm No comments:

For all urban modellers out there, there is a fantastic tutorial on issue 99 (which just came out in the UK) of the excellent 3D World magazine. Tim Danaher shows you how to model, in Google's SketchUp, your own version of one of the world‘s most striking modern buildings: the 'Turning Torso'. Designed by the Spanish architect Santiago Calatrava, this 54-floor skyscraper in Malmo, Sweden, presents a unique challenge to SketchUp artists.
In the walkthrough in the magazine, Tim explores how to create a single storey of the building, twist it, duplicate it into a six-storey module, then use this as a building block for the finished model. 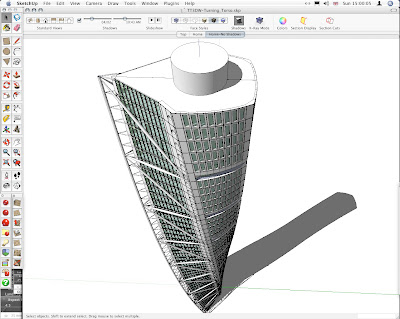 You can download the full-sized screenshots and supporting files from the link below, while you're at it there's many other free tutorials on the mag's site well worthy of every modeller's attention.
http://mos.futurenet.com/resources/3dworld/TDW99.t_sketchup.zip
Posted by Christos Gatzidis at 12/06/2007 07:52:00 pm No comments:

Details are unsurprisingly light on this one, but DigiTimes (http://www.digitimes.com/) has it that nVIDIA is gearing up to launch its next-generation GPU in a few months time.

According to reports and sources close to graphics card makers it has been revealed that the GeForce 9 series will include the D9E, a "high-end product that adopts 65-nanometer manufacturing", supports DirectX 10.1 and Shader Model 4.1 and the mid-range D9P, which will supposedly adopt 55-nanometer processing.
Apparently, the former will be the first product in the new family, while the latter won't see light until June. All this, while more or less on rumour and speculation stage at the moment, is an indication where one of two biggest graphics card makers is heading at in the New Year.
Posted by Christos Gatzidis at 12/04/2007 08:22:00 pm No comments:

I have highlighted Project Gotham Racing's urban models in a previous post but I've just unearthed something new in YouTube which further demonstrates the issue at hand. Bizarre Creations themselves, the company behind the title, have posted a movie taking a background look at the city creation process in Project Gotham, this is a must for anyone interested in 3D city modelling.

It is always interesting to see other people processes towards virtual city creation and while I have not yet bought a copy of PGR4 for my XBox 360 (still struggling with Gears Of War!) this one definitely looks as one of those games to buy just to admire the city modelling work...