I have just confirmed my inclusion on the Reviewer Committee for the First International Conference on Networked Digital Technologies (NDT 2009). The proposed conference on the will be held at the VSB Technical University, Ostrava, Czech Republic from July 28-31 2009, aiming to enable researchers to build connections between different digital applications. Accepted papers will be published in the conference proceedings published by IEEE (and later found on IEEE Xplore). Several journals will host the best papers of the conference. 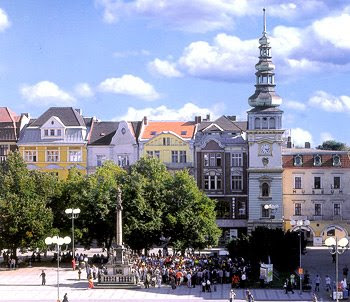 I am now part of the Reviewer Committee for the Second International Conference on the Applications of Digital Information and Web Technologies (ICADIWT 2009), a forum for scientists, engineers, and practitioners to present their latest research results, ideas, developments and applications in the areas of Computational Intelligence, Artificial Intelligence, Networking, Neural networks, Network security, Biometrics Technologies and Applications, Pattern Recognition and Biometrics Security, Bioinformatics and IT Applications in the above themes.

The event this year takes place in London between the 4th and 6th of August, for more information about submission deadlines and registration costs please check the conference website at http://www.dirf.org/diwt2009/index.asp.
Posted by Christos Gatzidis at 4/22/2009 04:00:00 am No comments:

It looks like a new iPhone is on the way this June or July, probably packing a 3.2 megapixel camera, gyroscope and larger internal memory. New documents also suggest motion tech could be at the heart of the upcoming new model. There have been reports that two Apple patent applications show that the company has been wrestling with the problem of gesture control in a portable device, and specifically, the issues involved in gesturing to a handheld when the user itself is moving.

One patent outlines an idea where the iPhone can detect when a user is moving and automatically enlarge the UI accordingly, reducing the scope for error. More interestingly, however, the patent diagrams seem to show a front camera on the iPhone, something that isn’t present on either of the existing models. From a games perspective this could add a whole new dynamic to the current touch screen and accelerometer functions. It will be interested to see how Apple continues with this...
Posted by Christos Gatzidis at 4/22/2009 03:54:00 am No comments:

The summary of a recent survey conducted by Californian software outfit Autodesk reveals that 84% of tech enthusiasts believe that videogames, in some way, provide “crucial life skills”. Participants in the study claim their gaming experiences assist them in a variety of ways, from improving hand-eye coordination to increasing reaction times and reflexes. The survey also found some surprising responses too, with participants suggesting that games can encourage social skills such as patience, understanding, creativity and precision. Finally, it is important to note that 25% of the surveyed developers, animation experts, designers and students believe that the skills they’ve acquired through game playing have helped them in their education. 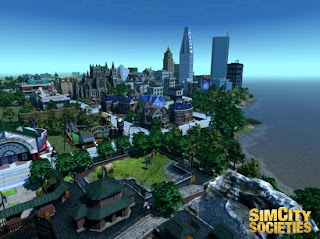 37% of industry respondents said that the ‘skills’ obtained via games have aided their careers, while 22% felt they’ve helped their social lives. “Games can have a real impact. I remember never looking at a city the same way after playing Sim City growing up,” reflects Mary-Beth Haggerty, senior games industry manager at Autodesk.
http://www.developmag.com/news/31697/Games-provide-crucial-life-skills
Posted by Christos Gatzidis at 4/18/2009 01:17:00 pm No comments:

Following from last week's CryEngine 3 post, here's a look at the latest features of Unreal Engine 3, as revealed at Game Developers Conference (GDC) 2009. The newly introduced lighting methods in particular look fantastic. More information can be found at the Epic official website (here). I've used the Unreal engine for game development teaching this year at Bournemouth University and it really is a very powerful tool (which can teach the students many things about the creative process of level creation).
Also if you're into UnrealEd don't forget to check Epic's 'Make Something Unreal' competition (here), a fantastic opportunity for the modders community and also a praiseworthy initiative from Epic.
Posted by Christos Gatzidis at 4/18/2009 12:05:00 pm No comments:

A new update on the excellent Procedural Inc website (the creators of the CityEngine modelling tool) showcases the creation process of NYC 2259, the extrapolation of New York city 250 years into the future, inspired by the great 1998 motion picture The Fifth Element. Today's street network of NY, imported from http://www.openstreetmap.org/, has been extended to a bigger area, available due to the lower water levels in the future. The example includes grammar rules to create futuristic skyscrapers in two levels of detail as well as flying cars. 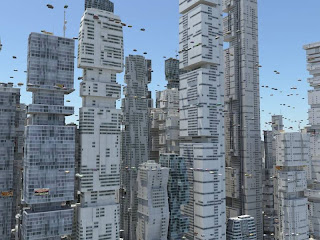 This showcase is a fascinating insight into both the CityEngine tool but also in what it can achieve using GIS data. More info, the complete video of the process with a very informative commentary and finally pics can be found here.
Posted by Christos Gatzidis at 4/16/2009 02:29:00 pm No comments:

At the recent the Games Developers Conference there was sneak preview of the CryEngine 3, largely considered the most advanced, graphics-wise at least, game engine today.
As the specs state; CryENGINE® 3 is the first Xbox 360™, PlayStation® 3, MMO, DX9 and DX10 all-in-one game development solution that is next-gen ready, with scalable computation and graphics technologies. With CryENGINE® 3 you can start the development of your next generation games today. CryENGINE® 3 is the only solution that provides multi-award winning graphics, physics and AI out of the box.
The complete game engine suite includes the famous CryENGINE® 3 Sandbox™ editor, a production-proven, 3rd generation tool suite designed and built by AAA developers. CryENGINE® 3 delivers everything you need to create your AAA games.

See the Crytek page for full info and updates, the vid above should also give you a glimpse of the capabilities of the new version of the engine. Looks very impressive indeed!
Posted by Christos Gatzidis at 4/09/2009 06:04:00 pm No comments:

OnLive, a cloud-based future for gaming?

OnLive, a tech company that has been in self-described "stealth mode" development for seven years, has unveiled new technology that allows even the most complex PC games to be played on a television set or any PC.

The ambitious venture, which hopes to revolutionize the gaming world by removing the need to continually upgrade PC hardware or buy new gaming consoles every generation, makes use of cloud computing, doing all of the game's video and audio processing on remote servers, then streaming the resultant images and sound back to the user quickly enough to play games in real time.

What's most important though, says OnLive founder and CEO Steve Perlman and COO Mike McGarvey, is that the system works with any standard PC game, and does not require developers to code for a proprietary system. Other attempts have fallen short in that area, Perlman told Gamasutra in a demonstration preceding the announcement.

OnLive's service, which is planned to combine a relatively low monthly subscription fee with other per-game business models not yet fully determined, requires only a one-megabyte download to a computer, or a small plastic dongle (called a "micro-console") to connect to a TV; no GPU is required. Once subscribed, users will be able to run any of the service's games, regardless of system requirements.

A number of major publishers including Electronic Arts, Ubisoft, Warner Bros., Take-Two, Eidos, and Atari have already signed on. Also, the company has announced a partnership with Epic Games that will see the Unreal Engine 3 easily adapt to OnLive's APIs.

"Not only have we solved the problem of compressing the video games, we've solved the latency problem," Perlman said to Gamasutra. "We knew, in order to make this thing work, we'd have to figure out a way to get video to run compressed over consumer connections with effectively no latency. Our video compression technology has one millisecond in latency, basically no latency at all. All the latency is just for the transport, and we've also addressed that." 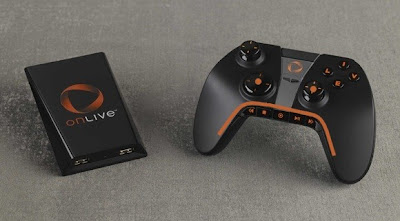 While it is of course impossible to completely eliminate the possibility of latency over a network, OnLive has actually gone to such lengths as to work directly with cable and internet providers to identify and repair inefficiencies in their systems that resulted in dropped packets or other flaws. Eventually, the company hopes to provide even faster service by streaming directly through cable to users' homes, much like paid television currently is. When OnLive launches this winter, the system will feature various community features, as well as the ability to spectate other players' games in real time, even if the game does not natively contain an observer mode, since all gameplay is delivered a video stream, that feature is integrated directly into OnLive itself.
http://www.onlive.com/
Posted by Christos Gatzidis at 4/05/2009 08:13:00 pm No comments:

3D web on the Mozilla browser?

Wish you could play Crysis in your Web browser? Two influential organizations are banding together to try to bring accelerated 3D graphics to the Web, a move that eventually could improve online games and other Web applications.
Mozilla, the group behind the Firefox browser, and Khronos, the consortium that oversees the widely used OpenGL graphics interface technology, are trying to jointly create a standard for accelerated 3D graphics on the Web. In response to a Mozilla proposal, Khronos established an Accelerated 3D on Web working group to create a royalty-free specification. The goal is to produce a first public version within 12 months, Khronos said in an announcement at the recent Game Developer's Conference in San Francisco. 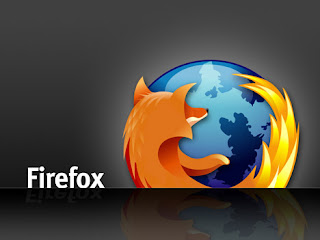 Underpinning the proposal is a trend toward significant speed improvements in JavaScript, the programming language used to write many Web-based applications. The proposal involves a mechanism to let JavaScript tap into the OpenGL standard to produce the accelerated graphics.
"Accelerated 3D graphics with the super-fast next-generation JavaScript engines from nearly every Web browser vendor means that we're going to be able to start to see more and more advanced applications written using open Web technologies," said Mozilla evangelist Chris Blizzard in a recent blog post. "3D is a huge part of that story and we're happy to bring our proposal to the table." Personally very interested to see where this development could lead...
Posted by Christos Gatzidis at 4/01/2009 10:30:00 am No comments:

The latest issue of the top-flight in its area IEEE Computer Graphics And Applications journal is dedicated to serious games and makes for a very good read if you're doing research in this particular field. The cutting edge work presented in this special issue is very inspirational and well worth exploring.

Last week I attended (and presented) at the First International IEEE Conference in Serious Games and Virtual Worlds, hosted by the world's premier Serious Games Institute in the UK at Coventry. The event was extremely interesting and diverse in research content, bringing together researchers from a range of disciplines to formulate a new cross-disciplinary community in the emerging field of serious games and virtual worlds. You can now watch edited video versions (no questions or introductions) of all talks at the conference including the keynote ones (by professors Alan Chalmers and Steve Benford) at http://dp-x.com/datpresenter/dpx.php?dpxuser=SGI.