While I am still pondering on whether I should acquire an iPad in September, a recent survey of iPad owners, as conducted by Resolve Market Research (and found in full here) appears to suggest that the device is emerging as a force to be reckoned with in handheld gaming. Appartently a reported 28% of the survey participants claim that one of their main uses for the iPad is gaming. Additionally, 23% preferred, between the iPad, smartphones and portable gaming devices, the former as the "the most enjoyable for playing games." 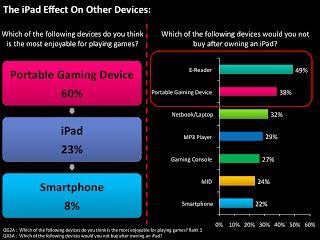 Most important however is the answer to the question regarding what mobile device respondents had no interest in purchasing after purchasing an iPad. A very impressive 38% percent answered portable gaming device. The survey is definitely worth a read as despite some iffy initial reviews, the iPad appears to be taking off in many entertainment-related application areas.
Posted by Christos Gatzidis at 7/11/2010 11:08:00 am

Well no doubt that most of people uses their ipad/iphone for playing games most of the time.