Disney's upcoming animated feature film called Tangled, based on the Rapunzel fairytale, will be using non-photorealistic rendering approaches to simulate a feel akin to oil painting. More importantly this stylization is based on the painting "The Swing", by the French Rococo artist Jean-Honoré Fragonard. 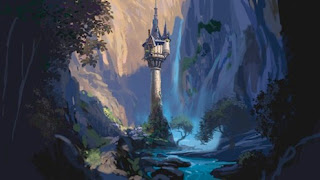 The images look very impressive indeed and due to be released on November the 24th this year it remains to be seen whether more animated feature films will follow down the path of this, i.e. using graphics rendering to simulate traditional hand-drawn pencil styles in the future.
Posted by Christos Gatzidis at 6/06/2010 08:39:00 am