Disney's new Prince of Persia: The Sands of Time movie features a city named Alamut as a digital set, partly created in the pre-production phase by the procedural urban modelling CityEngine application, for which I have blogged about many times. 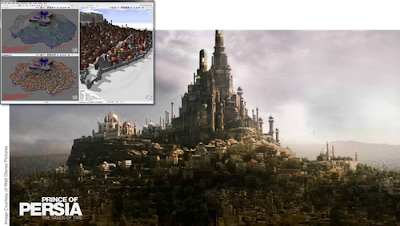 Based on the popular computer game of the same title, during the design of the impressive Arabic city during the pre-production of the film, CityEngine was applied for the quick ramp-up of the digital set and in order to test the layout. Following this, in the subsequent post-production phase, the final shots were conducted by MPC using their own tools. A great example of how automatic urban modelling tools are being increasingly used today for high-profile projects.http://www.procedural.com/
Posted by Christos Gatzidis at 6/23/2010 12:30:00 pm