Nokia has recently announced that more than 1.4 million people have downloaded its new version of Ovi Maps in the week since it was made available on 21st January.The application promises free walk & drive navigation and is Nokia's answer to Google's release of its own Google Maps Navigation on Android. 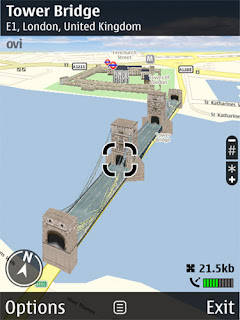 The difference is that the Nokia was initially available for more than just one device (like Google's was). This created the positive side-effect of the huge number of people using it but also that of the creation of potential for add-on location based applications. Nokia plans to preload the new version of Ovi Maps on all its GPS-capable phones, including local country map data starting from March.

It should be noted that at the moment Ovi Maps supports 3D views as well although only models of landmarks are currently used (something which will no doubt be expanded upon in the future).