I've just read an article on Joystiq which also mirrors my thoughts and first experience on the Emotive BCI headset fairly closely. The potential of this is almost mouth-watering, but the reality is that trying to perform simple actions can result in great frustration after a while.

Quoting from the article: "The EPOC is not a mass market device for people looking for a turnkey telekinesis solution. It's an expensive toy for people to experiment with, or a cheap device for scientists to do research with. It's fun to show off to your friends but probably not something anyone will want to play with for very long. The signs were there from the beginning that the EPOC might not live up to its hype, but with full page ads in places like the pro-transhumanist magazine H+ and promises of sci-fi technology in the here and now, Emotiv clearly sees geeky gadget enthusiasts like me as its target audience. With all that promise, all those allusions to nerd icons like the Jedi, it's hard not to feel a little taken advantage of. Seldom has the early adopter tax (one I've paid often) felt more onerous." 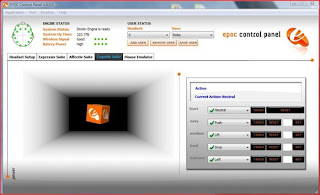 However, unlike the writer of the article I am definitely not prepared to give up on the BCI technology which is in its infancy and will develop further over the next few years. At the moment it feels as too experimental (since it is!).
Would it not be interesting to see this technology being the mainstream interaction route in a couple of decades time? Devices such as Emotiv will then be the equivalent of an Atari 2600 to today's PS3/XBox 360 users...
You can read the full Joystiq article here.
Posted by Christos Gatzidis at 2/07/2010 06:38:00 pm