1000: Find 'Em All for the iPhone is a location-based game using GPS with a fairly original concept; while it looks like a Nintendo classic such as Zelda and Pokemon (viewing the action from the above, you have to drag a sprite around the screen exploring a 2D world), it is a GPS game with two different ways in which you can use connectivity features to bring variety in the gameplay. 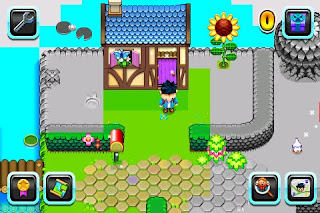 First of all, you can use GPS to identify 'gifters' (wi-fi hotspots) in the real world. These appear as characters in the game that hand over presents when you tap on them. Travelling around (in the real world that is) will hook you up with different hotspots and therefore different gifters as well. Also, the game can create presents for the player to collect in the real world. This is facilitated by items appearing on Google Maps. The game is well worth checking out as a novel take in GPS gaming, a medium often talked about but with no real commercial success as of yet.
Posted by Christos Gatzidis at 2/10/2010 05:40:00 pm