An edited book for which I made a contribution for with a chapter has now come out both in print and also via online access. The book is titled "Handbook of Research on Practices and Outcomes in Virtual Worlds and Environments" and the chapter I co-authored "Addiction in World Of Warcraft: A Virtual Ethnography Study". The book, weighing in at 840 pages (20 out of which are on the aforementioned chapter), also contains many other contributions of interest and is published by IGI Global (DOI: 10.4018/978-1-60960-762-3, ISBN13: 9781609607623, ISBN10: 1609607627, the cover can be seen below). 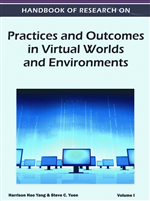 The abstract for the chapter I co-authored is the following: "This chapter presents an investigation in determining whether players are addicted, or show signs of addiction, to the Massively Multiplayer Role Playing Game (MMORPG) World of Warcraft. Criteria to ascertain addiction in World of Warcraft players were developed based on well-documented theories in the area. A questionnaire was used in order to obtain data for analysis. This was distributed to a population of World of Warcraft players by use of advertisement on guild websites and on the official game forum. The results of the questionnaire show that 11.86% (n=21) of respondents matched the developed criteria of addiction in World of Warcraft. These respondents are considered to be addicted or are at “High Risk” of being addicted. This figure is confirmed by other studies of addiction levels in MMORPGs undertaken by existing research."

More information about the book, all other chapters and the opportunity to purchase it (or individual chapters as .pdfs) at the IGI Global site here.
Posted by Christos Gatzidis at 10/09/2011 11:32:00 am