Broken Sword heading to the iPhone

Revolution Software has just announced that their best known game, Broken Sword is now heading to the iPhone. Broken Sword: The Director's Cut is an update on the adventure classic, similar to theremake of Beneath a Steel Sky, which has been very successfull and has prompted the company to pursue the remastering of old classic titles further. 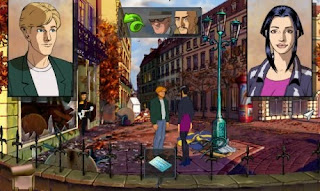 The game follows the adventure of Nico Collard as she races against time to uncover a sinister conspiracy linked to an ancient secret and includes some all new cut-scenes and animation. Apparently the game will be on iTunes store before March, can't wait personally as it's always been one of my favourite adventure games and it would be great to have a mobile version of it.
Posted by Christos Gatzidis at 1/14/2010 09:26:00 am