In an article found here at the Gamasutra website, two University students propose a concept and its prototype specs for something which at the moment is (to a large extent) missing from the commercial (console) games market, a controller that uses the best of both worlds in user interaction; i.e. motion sensing and the traditional and time-honoured controller, which many hardcore games and gamers alike cannot part for something more casually-oriented such as Microsoft's Kinect. 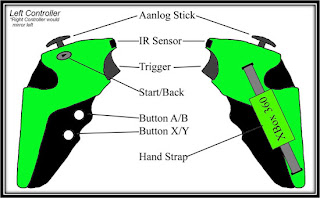 The proposal is very interesting (and depicted above) and definitely worth a read. Personally, I have had a Kinect sitting next to my XBox 360 for almost a couple of months now without it even leaving the box yet, it is very difficult to convince someone who plays games such as Gears Of War or Crysis to the everyday merits of motion sensing and it is refreshing to see proposals such as this one attempting to offer a new solution.
Posted by Christos Gatzidis at 9/25/2011 01:29:00 pm