Urban Pad, one of the most most prominent contenders in the auto/semi-automatic urban modelling field, has now received its September update to version 3.0.9. While there are many interesting features on this, from the obligarory bug fixes to using templates as defaults to assist begineer users, the one that caught my attention is the streamlining of the ability to export to Epic's UDK (as an .fbx file). A test example of this is shown below. 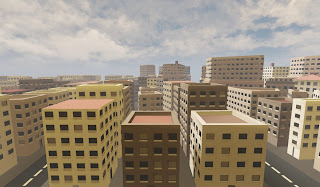 If you want to try this out yourselves a short tutorial of this can be found here while the Urban Pad application itself can be downloaded as a trial version from here.
Posted by Christos Gatzidis at 9/25/2011 01:12:00 pm