With Vive out there Oculus did need something on the controller/interaction front to rival what is for many its biggest competitor and, as of the earlier this month, they have their Oculus Touch device out there for this. 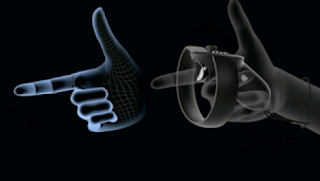 You can read more about this in a snapshot on the official Oculus blog here, the biggest innovation here for me (as can be seen above) is the fact that the Touch appears to do finger tracking.

That is a fairly useful feature indeed and could give Oculus an edge over something such as the Vive, even though the latter certainly had the headstart on innovation in controllers.
Posted by Christos Gatzidis at 12/31/2016 05:03:00 pm