After the inevitable publicity it generated (which I also covered in this blog) the Unity game engine Adobe Flash Player export/plug-in tool is now available for everybody to test out. This is via a public beta of version 3.5 made available yesterday with an integrated for the first time add-on of the eagerly awaited Flash functionality. 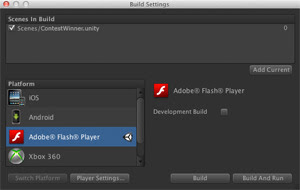 In addition to this Unity is obviously keen to get the community to start working on the tool as soon as possible, as it simultaneously announced a Unity Flash competition with a cash prize of $20,000, more on this and the tool itself here.
Posted by Christos Gatzidis at 12/23/2011 10:16:00 am