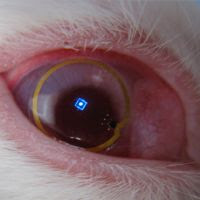 Furthemore, research is now carried out for a multi-pixel version of this as an extension of the current prototype though already the potential applications are limitless, particularly on ones with augmented reality connotations. While applications such as military usage for example are obvious, it would be fantastic to see this used in gaming as it could be used as a great enhancement of contemporary visualisation technology.
Posted by Christos Gatzidis at 11/27/2011 12:45:00 am