A new adventure game called A New Beginning by Daedalic Entertainment has caught my eye because of its very beautiful hand-drawn art; as shown in the image below. Described by its creators as an interactive eco-thriller, the game immerses the player in a story which combined both time travel but also, and perhaps more importantly, global climate change. 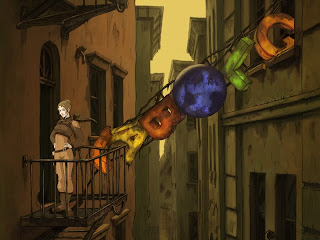 Recently released for the PC platform, this appears to be one of the strongest point and click titles that have emerged of late, with the non-photorealistic rendered artwork showcasing how much this type of visualization can enhance the impact of a storytelling-driven game. A making of (pre-release) for the title (discussing the artwork creation amongst other issues) can be found here.
Posted by Christos Gatzidis at 6/19/2011 07:21:00 pm