One of my favourite games of all time, Leisure Suit Larry in the Land of the Lounge Lizards, originally released by Sierra Online (and then remade again in 1991, the image below is from this version of the game) is now to get yet another facelift. The good news is Al Lowe, its original creator who infused the game with inimitable style and humour (making it a template for comedy adventure games) is involved in this, along with Replay Games. 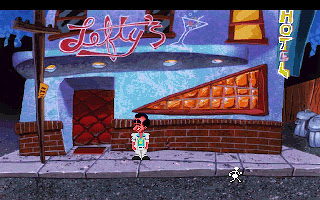 The announcement was made at the recent E3 and apparently the game is to appear on a host of platforms (including mobile and tablet ones).
Posted by Christos Gatzidis at 6/07/2011 08:59:00 pm