After months/years of speculation (and a number of posts on this blog too) Sony has now unveiled its first Playstation phone, called Xperia Play, created by Sony Ericsson and running on Android 2.3 (see picture below for the device). 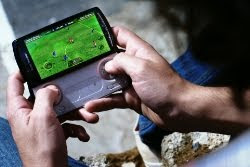 There are plenty of things to get excited about with this such as analogue stick style touch pads, promised console-quality games, a 50-title launch lineup (quite impressive for any console, mobile or otherwise) but personally I can't help but feel that Sony is somewhat competing with itself having just launched the NGP/PSP 2 device, as well as the huge competitor in this area that is Apple.
Posted by Christos Gatzidis at 2/17/2011 12:29:00 am