Following from yesterday's post about the iPhone version of Rage and megatexturing here's some more great news from id's QuakeCon 2010; id Software has released the GPL-licensed source code for two previous titles, Wolfenstein: Enemy Territory (released in 2001) and Return To Castle Wolfenstein (released in 2003, and still getting some airtime on my original XBox!). 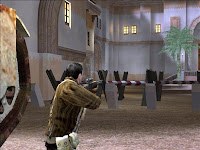 John Carmack also suggested during his keynote address at the event that id will look at making the Doom 3 source code available as well (something people have been clamouring for for years now, I know I've been mentioning it in my lectures for at least a couple of years now). Great news for aspiring games programmers as previous id engines (the company has a great tradition of making them available, once out of date, to the public) have been used for many great mods over the years, particularly the Quake ones.
Posted by Christos Gatzidis at 8/14/2010 08:49:00 am