Monkey Island 2 rumoured for the iPhone

There is a circulating rumour that LucasArts is working on a 'special edition' of Monkey Island 2 for the iPhone, based on the immense success of the original game on the Apple device. It is claimed the publisher could unveil its planned release at this week's Game Developers Conference in San Francisco. 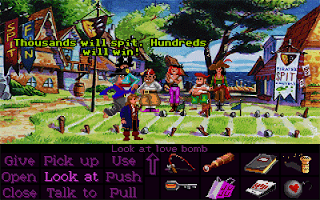 The updated version might come with "all-new graphics and audio", similar to the original. Another rumour is a Tales Of Monkey Island-series type of release (similar to the recent episodic PC one). It will be interesting to see if these rumours substantiate, this is after all one of the best adventure games of all time.
Posted by Christos Gatzidis at 3/09/2010 05:44:00 pm