As described in a previous blogpost covering John Carmack's display of a VR headset with Doom 3: BFG running for it, the prototype device now has a name and more importantly a Kickstarter campaign behind it. Oculus Rift has, at the time of me writing this, well over 5 times the original amount asked for pledged and also the considerable backing of industry giants such as Carmack, Cliff Bleszinski, Mike Abrash and others. 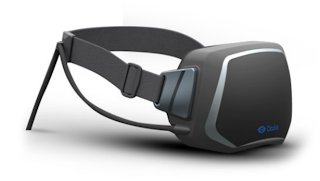 Key points of the device include affordability and also plans of integration with both the Unreal engine and Unity. It's great to see this almost a reality after the very recent Carmack prototype display and hopefully it can be a success in the near future as it could usher in many new great possibilities for gaming (see for example an article in Edge magazine about possible games with the device here).
Posted by Christos Gatzidis at 8/07/2012 12:07:00 am