Sparked off by the recent Ubisoft Reflections' recent visit to Bournemouth University (see post below), I have been revisiting a game I couldn't spend much time on earlier in 2011, Driver San Francisco. Typically, as with the rest of the Driver game series franchise, the title is a high-octane racing game, what however is more interesting to me is the great effort in recreating or capturing the essence of the well-known American city in a 3D urban model. 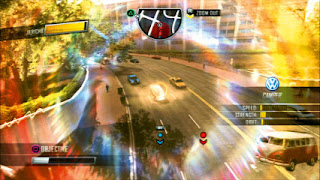 What adds to the great urban model is not just the detailed nuances but the game mechanics offered to the player. Without giving too much away, the player can 'shift' from one body/car to the other, providing instantly a very open-world/exploratory feel to the virtual location. In fact that (combined with the high-quality 3D virtual city included in the game) I can imagine easily wasting time on, i.e. just messing with that gameplay feature alone. Well worth exploring for anybody into real-time (the game runs at 60 fps) 3D virtually reconstructed urban locations.
Posted by Christos Gatzidis at 2/04/2012 12:06:00 pm