Brain computer interfaces (BCIs) operating via EEGs are used in a variety of projects and interactions and I have just come across one which is quite different, as it is more music than interaction related. Academics from the Universities of Plymouth and Reading in the UK are collaborating on an EPSRC-funded project which aims to use EEG-driven BCIs to generate music according to the individual state of the user using the prototype. The idea is to eventually attempt to use this as means of therapy for afflictions such as, for example, depression. 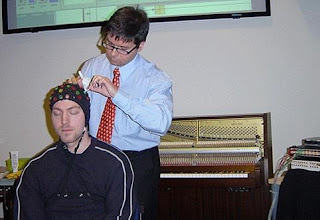 The full story of the project (including more details on how the prototype will work) can be found here on The Engineer website.
Posted by Christos Gatzidis at 1/01/2012 04:53:00 pm