Having invested only in the iPhone versions of these so far, I was delighted to hear that the recent excellent remakes of Monkey Island 1 and 2 by Lucasarts, two of the finest adventure games ever and also complete with incredible hand-drawn non-photorealistic graphics, will now receive a boxed release on the 9th of September. 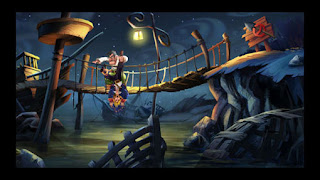 These HD remakes were available as digital-only so far, complete with an incredibly cool feature that allowed the player to switch from original graphics to HD remake ones at any point during the game. There will also be bonus features such as concept art material and pre-production content from an unrealised film to entice fans to invest in these, as well as playable soundtracks. The platforms, as with the digital versions, will be PC, XBox 360 and PS3.
Posted by Christos Gatzidis at 7/09/2011 09:58:00 pm