Quno, a web-based rail search and booking service due to launch later this year has announced that they will be providing mobile location-based games at key train stations in the UK including London Waterloo, Paddington, Liverpool Street, Euston and also ones based out of London such as Birmingham New Street and Manchester Piccadilly. 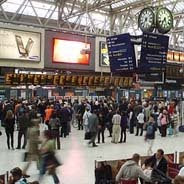 In order for the players to participate they will need an iPhone or Android device with the Quno client application installed plus also physical presence at the train station. The games will be, at this stage at least, fairly simple such as thinking up a quick rhyme or landmark photo challenges.

Really eager to check this out as I have seen projects like this in the past which looked incredibly appealling but never really took off, this could not only provide some basic entertainment in train stations but also pave the way for more complex multiplayer location-based (or otherwise) mobile games in public areas (playing Street Fighter on an iPhone with another train passenger while the game is projected on a large screen display in Waterloo anyone?).
Posted by Christos Gatzidis at 9/29/2010 11:27:00 pm