Apple has recently made headlines once again (in the game development community) with the Apple TV announcement which included news which directly relate to both games developers and the relevant audience alike (such as a controller which uses touch and also motion sensing, pictured below). 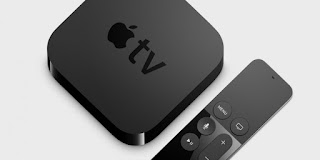 With Apple being Apple this could have significant potential for the future, becoming (potentially) a very credible gaming platform that could be a major contender in the market place.
Posted by Christos Gatzidis at 9/30/2015 11:59:00 pm