Edge magazine recently uploaded an online piece on the Bournemouth University student team (from the Games Technology and Music and Audio Technology courses at the School of Design, Engineering and Computing) which has reached the finals for the Epic Games' Make Something Unreal Live 2013 competition.
The team is called Static Games and their game Mendel's Farm. This particular article focuses on the work the team has been carrying out in the run-up to the finals which start in a few days time in Birmingham, their collaboration with the mentor company assigned to them, Portsmouth-based Climax Studios, and, finally, their aspirations to turn Mendel's Farm in a PS4 game should they win the competition and obtain the full license for Unreal engine version 4 (the prize of the competition). It also includes some quotes from myself too in my Bournemouth University framework leader for the Creative Technology courses capacity. 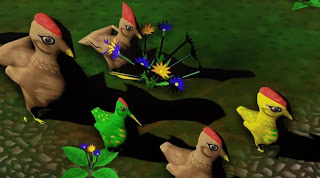