A retrospective look at The Last Express

Picking up from the previous post which discusses a contemporary cartoon-shaded game (Eat Them), I have recently read an article in Edge magazine featuring a 'making-of' discussion of an older adventure game called The Last Express which at the time (it was released in 1997) sadly passed me by.
At a time when FMV (full motion video) was quite prevalent in adventure games and viewed as the future of interactive storytelling, The Last Express took a different approach, and, by using a combination of rotoscoping and line-drawing, attempted to recreate a non-photorealistic style which according to the producer of the game was heavily influenced by Scott McCloud's seminal Understanding Comics book. This was in regards to providing just enough detail in a character and in a visualization (i.e. not too realistic, not too abstract) for the player to better identify with the depicted action. 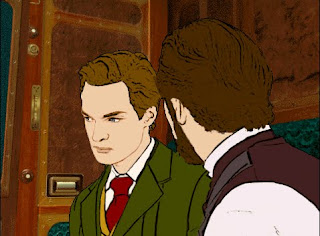 The game was (for a variety of reasons explained in more detail in the Edge article) not very succesfull commercially and reached a small audience (which explains why I never got into it despite being heavily into adventure games at the time!) but is now available at DotEmu (here) and, according to Jordan Mechner, its creator (and also creator of the seminal Prince of Persia games), could well be soon adapted to an iPad version, subject to interest.
The Last Express is definitely well worth checking out for evidence on how non-photorealistic rendering can enhance a character-driven, dialogue-based interactive story.
Posted by Christos Gatzidis at 1/16/2011 01:13:00 pm