The popular augmented reality app Layar has now been downloaded more than 1.5 million times for iPhone and Android, as was recently announced. At the moment more than 500 layers for the app have been published. Additionally 2,000 more are in development, with hints for paid layers to come. 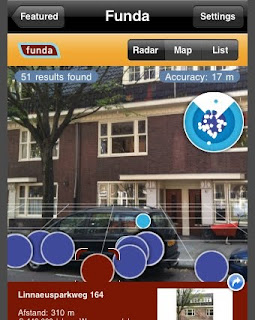 Some of the interesting interesting examples demoed alongside these announcements were the Beatles AR tour of London, a game called Jewel Collector and a branded Ubisoft campaign for Splinter Cell. The latter involved chasing virtual characters round a real-world city.
It's great to see Layar, one of the best representations of AR on mobiles going from strength to strength, especially after a rocky 2010 start (where the application was pulled from the iTunes store for weeks in order for bugs to be fixed).
Posted by Christos Gatzidis at 4/17/2010 07:54:00 pm