Unreal Engine 4 and new Epic Games in the works

Epic Games, the creators of the Unreal engine, have announced that they are gearing up towards the production of five different new game projects plus also a new engine. This engine is of course version 4 of the Unreal engine, though apparently the five said games are not connected in any way to the Gears of War brand (the third version of which is soon released). 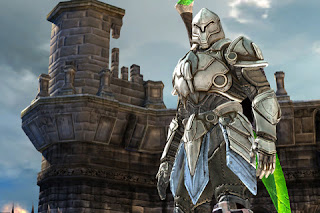 Rumours include a new Unreal Tournament game (it has been ~4 years since the last one) though personally I am more excited by; a) seeing whether one of these five games will be a mobile iOS title, similar to the groundbreaking Infinity Blade the company produced (pictured above) b) what the new functionality of Unreal Engine 4 will be, version 3 has been with us for a few years now and despite constant updates it would be excellent to see it significantly overhauled with new features taking advantage of recent advances in PC hardware.
Posted by Christos Gatzidis at 8/17/2011 05:09:00 pm