News has broken that Apple has filed a patent which features augmented reality functionality for the first time as part of the core of iOS software, all linked to the capabilities it already has for mapping. This will be in a very similar way to the approach that existing third party AR apps are conducting it; i.e. by overlaying content/data onto the camera feed. It can be seen in more detail in the picture below. 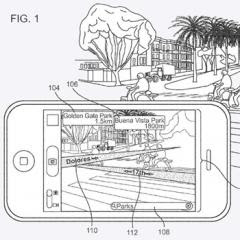 While this may potentially worry developers such as Layar or other existing developers that are working on/have proposed AR solutions for Apple devices already, it is in my opinion a very positive development for seeing the medium attain more widespread usage from the average iPhone/iPad user.