On a roll of posts on games with non-photorealistic graphics I have been train-spotting recently, Evolutionary Concepts has released, on the Apple iPhone/iPad, Road Blaster (also known as Road Avenger). This is best remembered as a Sega Mega CD title (although it is a lot older than that, first released on the arcades in 1985). 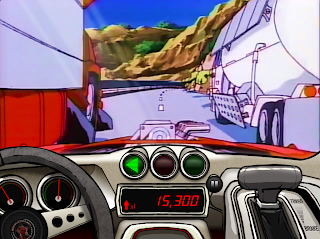 The game features very striking anime-style visualizations and is, as the title suggests, a racer. This comes with additional new features over the original such as the usual tilt controls, enhanced graphics for the iPhone 4 and the iPad, leaderboard and GameCenter support and others.
It is however the unique visuals that make it stand out and appear so impressive. Non-photorealistic racers are very rare, even more so on mobile devices, so it is nice to see this particular title brought to the limelight again.
Posted by Christos Gatzidis at 1/22/2011 01:10:00 pm