Google Maps for Mobile receives an update, version 5.0 now out for Android

For the first blog post of the new year, an important piece of news which came about during the last couple of weeks of the previous month; Google has now released Google Maps for Mobile version 5.0. While only available on Android (for the time being at least), this new version of the application offers new features which, most notably, include the adoption of vector graphics and offline access. 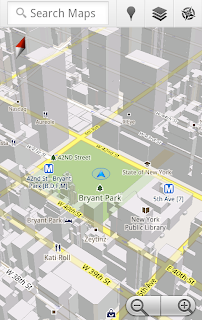 The aforementioned vector graphics update (which, it should be noted, was originally a Nokia Ovi characteristic feature that Google has now also fully subscribed to) means that Google Maps now draw maps in a dynamic manner, thus enabling the user to use a tilt function to see them in 3D. This of course comes complete with building model representations from over 100 cities around the globe.

No doubt the iPhone version will appear soon enough, looking forward to seeing these new updates in action on my 3GS device! Till then you can read more about this update here.