Microsoft has recently announced Smartglass, in their own words (from a recent press release): "Xbox SmartGlass is a free application for Windows Phones, Windows 8 and other portable devices. By delivering companion content and control to enhance your experiences on the Xbox console, Xbox SmartGlass makes enjoying TV, movies and music, web surfing, and playing games even better. Imagine that your tablet or phone knew what you were watching on TV and presented bonus features without you having to lift a finger. Xbox SmartGlass turns any TV into the ultimate smart TV." 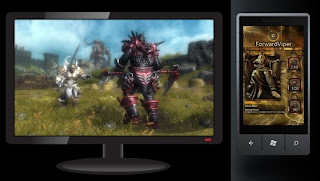 Smartglass therefore seems as an interesting idea playing on the concept of convergence of devices. Moreover, the Smartglass SDK is now also accessible to developers who are part of the Microsoft Game Developers Network. This consists of a SmartGlass JavaScript library, a sample application and the Xbox SmartGlass Studio. It remains to be seen if this is something which can take off and really become part of both third-party but also Microsoft games however it remains nonetheless an intriguing concept, on paper at least.
Posted by Christos Gatzidis at 6/28/2012 08:08:00 pm