NeoGeo X handheld to be released

Blaze, a company which has under license created a variety of Sega Megadrive-related hardware in the recent past has now announced that later this year will be releasing a product called NeoGeo X, essentially a handheld version of the iconic SNK console. NeoGeo X is to have 20 built-in titles, SD card expansion capabilities, a 3.5" LCD screen, A/V output, internal stereo speakers and a headphone socket amongst other features. 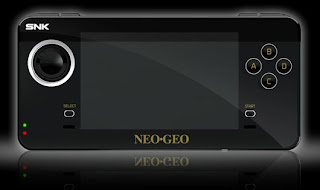 As somebody who always craved after the original Neo Geo (which was plagued by affordability problems at the time and still commands a hefty price on eBay) I welcome this news as it means that this classic piece of hardware can, albeit belatedly, get a wider audience, this time in a mobile form.
Posted by Christos Gatzidis at 3/17/2012 07:56:00 pm