In an unexpected move, the XBox 360 is to have an XBLA release of the classic Dragon's Lair game, quite possibly the first cel-shaded game which not only allows the traditional controller input but now also Kinect interaction. This is quite ironic as Dragon's Lair has been often criticised (quite rightly in many ways) as a game where the player has hugely minimal engagement with the action. 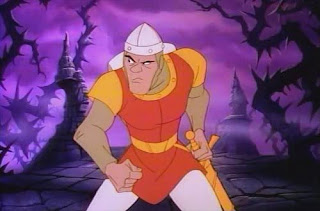 Now, instead of pressing on the (one) button to wield a sword or left/right to swing from a rope Kinect will open new possibilities to the player acting out these movements, breathing, in a surprising way, life in an old classic (the game was released in 1983). Personally I can't wait to see how this one plays out.
Posted by Christos Gatzidis at 3/23/2012 03:35:00 pm