For the first post of 2012 I am happy to report that Infamous Adventures has now released (a few days before 2011 lapsed in fact) their finished version of the fan-based remake they have been working on for years of Sierra Online's classic adventure game Space Quest 2. 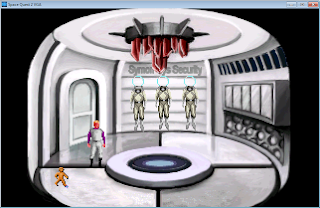 The game is remade in an early 90s point and click style (and with recorded voiceover and VGA graphics) rather than sticking to the original interface and low res visualisations. For people such as myself who regarded the Space Quest series as one of the seminal adventure game series ever (because of its inimitable subversive sci-fi humour) this is a rare treat and definitely worth downloading, at no cost, from here.
Posted by Christos Gatzidis at 1/01/2012 10:15:00 am