Time to revisit an urban modelling solution I covered a long time ago on this blog (in its first year in fact!) which is still around and has just had a very recent update/upgrade. This is CyberCity 3D which has, earlier this month, added multipatch footprints and shapefile buildings with roof features (according to their press release found here) on their Off-The-Shelf building library. 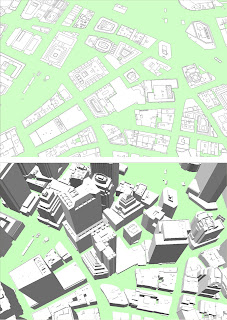 CyberCity 3D currently covers 48 major cities worth of 3D building data (mostly US-based according to the list on their site but also ones found elsewhere, such as Paris and Amsterdam, amongst others) with free partial samples of this information also available for download should you want to check them out before purchasing.

CyberCity 3D's website is well worth checking out on the whole, not just to read about the current press release outlined above forming the latest update of their service but also some of their other initiatives too (such as, for example, ArcGIS integration, their models being featured on Google Maps for mobile and others).