Similarly to the post below, here is another Unreal-created game released this month; Desert Zombie: Last Stand. I have posted about this one before (while it was still in its production stage) and it really is a fine example of how UDK/the Unreal engine can be used to create a third-person shooter game (in the vein of Gears Of War) for the iOS. 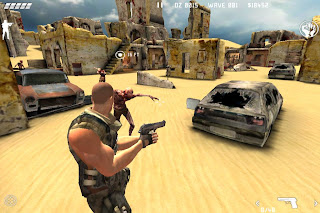 Again then, this is well worth checking out in order to gauge the capabilities of Epic Games' engine for the iPhone/iPad. It is also worth visiting the game's official website as it has a section titled Developer Diaries (found here) which takes you through different stages of the production pipeline, from concept art to motion capture sessions.

It is fascinating to see the amount of effort put in in different parts of the production for a mobile gaming title today; effort which a short while ago would/could only be justified for your AAA super-commercial retail console/desktop gaming release.
Posted by Christos Gatzidis at 12/23/2011 11:11:00 am