Today a review called Next Gen by Ian Livingstone and Alex Hope was released which is focused on a bid to the UK Education Department. This 88-page bid makes specific suggestions for important changes across secondary, further and higher education in this country in order to facilate a better production of graduates with relevant skillsets for the UK games industry. This is best summarised in 20 succinct steps (which can be found and read here). 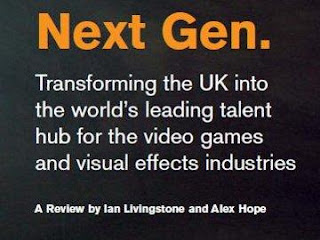 The report has already generated discussion and controversy (including comments from the government, TIGA and many others). On a personal level, while I agree with a number (if not most) of the suggestions, such as for example the increase of support of research-oriented university-industry collaborations in video games and visual effects and the strong focus on core computing skills and STEM, I feel that it is important not to treat higher education exclusively as a training school, as is unfortunately the norm in a modern market-driven economy.
Posted by Christos Gatzidis at 2/01/2011 11:32:00 pm