The incredibly successful indie PC hit Minecraft is to be released on iPhone and iPad, according to a recent announcement by the game's creator Markus Persson. While these versions are not expected to have the full features of the PC version this still is an important piece of news for mobile gaming. 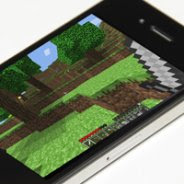 It should be noted that the PC version itself is still a beta one, despite having sold, in downloads, over 1.3 million copies. As long as the touch screen interface usability issues are respected and integrated well enough in this it could well make a fascinating addition to Apple's gaming cannon.
Posted by Christos Gatzidis at 2/26/2011 02:05:00 pm