According to a recent SmartPhone Intelligence survey from Compete, a Kantar Media company, a very impressive 51% of iPhone owners have five or more games installed on their device or devices. This statistic is a great example of the popularity of gaming on Apple's device, particularly when coupled with a reported 37% user base stating that they play games at least every day. 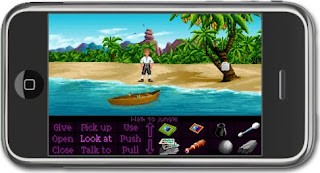 The most popular genre in the research is reported to be the puzzle genre, an interesting finding, which perhaps corroborates the recent re-release of many classic point and click adventure gaming titles on the device. Nonetheless, it is evident that gaming is a hugely strong driving force on the Apple platform and when contrasted to a statistic of 46% of BlackBerry owners having no games whatsoever on their device, it becomes obvious how far more preferable the iPhone has become for gaming use.
For more info on the survey visit Compete's website here.
Posted by Christos Gatzidis at 7/10/2010 12:45:00 pm