A research project from Microsoft Research, Newcastle University and the University of Crete has been recently making headlines; it is a device called Digits which is basically a bracelet with infrared sensors and a ring of LEDs used to detect and then reconstruct the hand motions of the user wearing it in 3D. 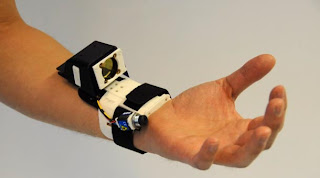 The device isn't perfect (crossed fingers for example seem to be an issue) but seems to work overall really well and could not only complement some of Microsoft's own Kinect limitations but also used as a stand-alone contraption for a number of application areas requiring different types of hand interaction.

Hopefully this will make it to retail at some point as there is definitely plenty of potential in it.
Posted by Christos Gatzidis at 10/13/2012 11:37:00 am