Ioannis Chatzigiannakis and a few colleagues of his at the University of Patras in Greece have created a game called (very aptly!) Hot Potato. The game works by using the "hot potato" concept as a kind of virtual timer that is passed between mobile devices that players hold. During the gameplay, the hot potato counts down to zero before it explodes. The person holding the potato at that time is ejected from the game. All players (and the game can support up to an impressive 14) can "throw" the hot potato to another player by moving close and making a throwing action with their arm, while holding their mobile device. Moving too far from the other players increases the chances that a new hot potato will be generated on your device (thus creating an incentive to keep the players together). 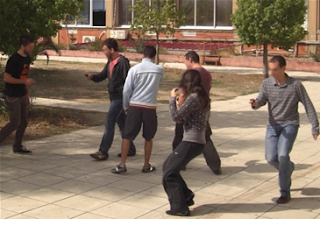 The game has been created using Sun's Spot sensor network device, which has an 180MHz ARM 9 processor with 512KB of RAM and 4MB Flash. The device is also IEEE 802.15.4 compliant and relies on a CC2420 Chipcon transceiver for communication. It has two buttons and sensors such as an accelerometer.

Hot potato would make an incredible iPhone app I think, you can read the publication describing the game and user studies (conducted in a variety of settings, including indoors ones) in more detail here http://arxiv.org/abs/1002.1099.
Posted by Christos Gatzidis at 2/14/2010 10:04:00 am