A new £1 million videogame project, called Climate Challenge 2010, is looking to encapsulate the complex realities of climate change by handing the control of the earth to the player. The title is developed by Oxford studio Red Redemption and is based on a turn-based micro-management concept allowing people to play god for two hundred years. 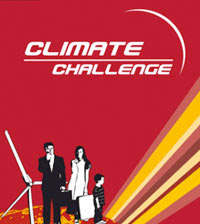 The most important part however of the game is the fact that the engine incorporates the work Dr Myles Allen's model, from Oxford University to simulate the climate change. The work has been published in the prestigious journal Nature.
The game itself will be published during the summer, released on the PC platform. Quite how timely this is after the Copenhagen summit is anyone's guess. Having said that, seeing scientific models rigorously applied to a game is always an exciting prospect.
Posted by Christos Gatzidis at 2/16/2010 07:11:00 pm