I have had a couple of EPOC EEG devices from Emotiv for a while now and it is interesting to see they have a new proposed device on Kickstarter called Insight.

Insight (the device on the right, EPOC is on the left) has less sensors than its predecessor (5 EEG sensors and 2 reference sensors) but does not (unlike EPOC) require saline solution for conductivity. 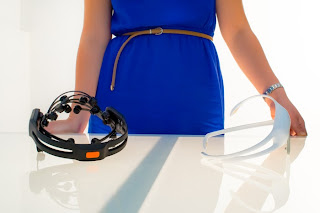 More information on what the device can do can be found on its Kickstarter site here.

What is worth noting is that with more than two weeks to go the campaign has already returned many times over the original goal, always a good sign of a piece of technology which has captured imaginations.
Posted by Christos Gatzidis at 8/31/2013 11:02:00 pm